The Story Behind “A Moment in Shade”

The Story Behind “A Moment in Shade”

When I look at my image A Moment in Shade from the series Desert Song, I see the push and pull of Africa and the experience of being caught between the old and new. When I stopped to take the photo, I, too, was quite literally moving between two of the many opposing forces present in Kenya.

Prior to getting this shot we had driven for hours on a dirt road heading to Nairobi, the capital city, after our stay with the Rendille people. Their village was in the middle of the Chalbi desert and so far from town that I had lost count of how long we had been traveling.

As we drove through endless, bare territory, I scanned the land for unexpected locations to shoot. It looked like I was out of luck as the only signs of life were the occasional cow or camel separated from the herd; there were no trees, no landmarks and certainly no people.

So, as we saw a person walking on the side of the road next to this uniquely shaped tree, I knew we had to stop. In many ways, this scene and its composition could be borrowed from the pages of a fashion magazine, but it also had so much latent meaning.

The man was carrying a bag which, from my angle, looked deceivingly like a briefcase. It was as if he was traveling to work in an office building – nevermind that the closest town was more than a day’s walk away, it was over 100 degrees & this was the first person we had seen in hours. Also, we were in the middle of the desert. 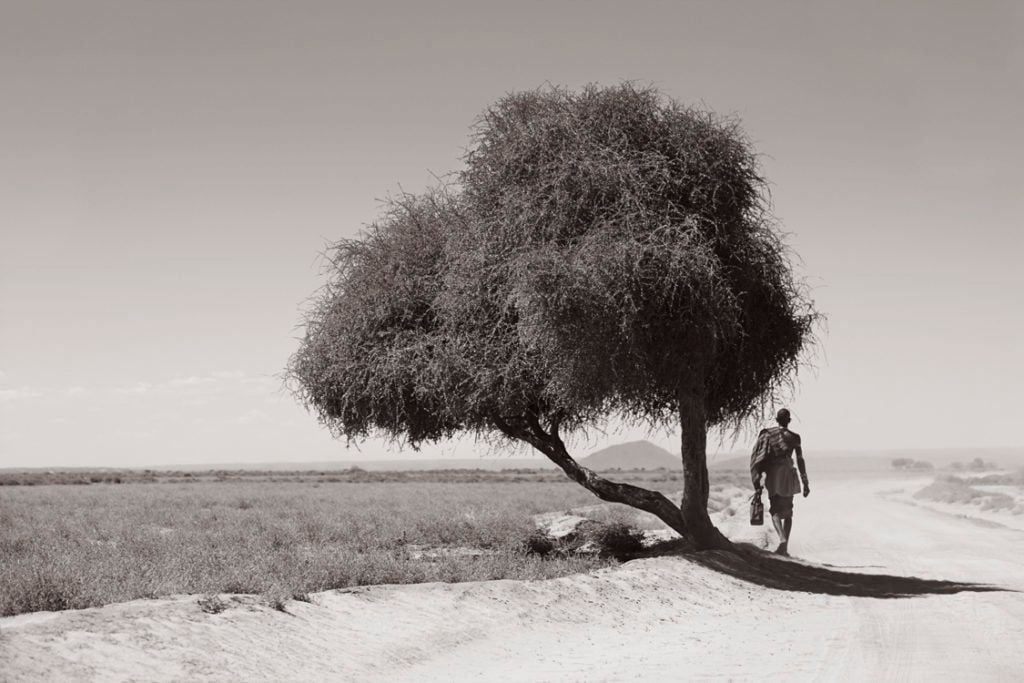 However incredible, there is another side to this moment.

While examining this image now, I feel that it highlights Africa’s precarious point in its history. The balance between traditions & the pull towards a more modern life, coupled with environmental factors, is changing the course of Africa’s existence. How the people react and adapt to changes over the coming years will dictate the culture for decades to come. Luckily we met a resilient group of young people working hard at keeping traditions alive, however, they face an uphill battle and must figure out what contemporary conveniences are necessary in their lives without losing their heritage.

Capturing the culture, the people and the land at this moment is yet another reason why making my work is more urgent now than ever.